If we could only share one thing with you about us…

…it would be our passion

This website is dedicated to inspire, motivate and empower people who seek excellence in their quest to make a positive difference in peoples’ lives, through the building of relationships, personal development of their true human potential, and creating “ASSET VALUE” and “RESIDUAL INCOME” to attain financial freedom through Network Marketing – the Business Model of the 21stCentury!

If we could only share one thing with you about us it would be our passion for our home-based business. The opportunity to help a lot of people escape mediocrity and realize their personal dreams they never thought possible before.

Aside from that we’re actively involved in sports, the outdoors and travel all over the world, we truly enjoy a unique lifestyle. Hubert is a passionate skier and tennis player, whereas Seta enjoys jogging and aerobics. With our business we are able to make friend all over the world and create residual income no matter where we are.

The best thing about having our own business is financial freedom and true time freedom we can enjoy on a daily basis. We are living the lifestyle of our dreams from our beautiful home in the Laurentian mountains, a winter and summer resort location of our choice, just north of Montreal, Canada, and are able to stay in contact with our world-wide organization through our seamless, internet-based business control system. 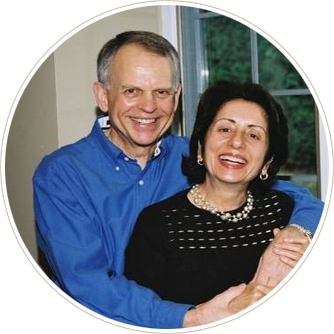 THEIR STORIES AND THEIR VALUES

Hubert was always fascinated about Network Marketing with its unlimited potential income, time freedom, and many other advantages! Hubert became involved in the Network Marketing Business in 1983 the first time; it was strictly a “dabbling effort” on a part-time basis, more out of “curiosity” to supplement his income at the time.

Hubert learned very quickly that “curiosity” was not enough to succeed in a new business! Let’s backtrack a little to hear Hubert’s compelling background, that allowed him to use certain significant adverse “past events” to shape his successful 32-year Network Marketing “journey”!

Hubert was born in Germany during the war (East Germany at the time). His life was constantly “challenged” in these difficult times, with events beyond his control.
When Hubert and his family became “involuntary refugees” from East to West Germany in 1954, it was like a tactical decision, under dangerous circumstances, due to the East-West cold war period at that time.

There was simply “no time to think about it”, Hubert recalls. “The decision had to be instantaneous to escape on a dangerous journey to save our lives”!

There was simply “no time to think about it,” Hubert recalls. “The decision had to be instantaneous to escape on a dangerous journey to save our lives”!

Hubert’s first lesson, even at his young age:

With Hubert’s mother and brother in the train in East Germany, he vividly recalled many stressful situations, to dodge the ever-present and feared STASI (Communist State Security Police) on the train looking for escapees. They finally reached West-Berlin, and were able to use the Allied Air Bridge to fly to freedom in West Germany!

The family’s arrival in a refugee camp in West Germany was anything but pleasant.

The family’s arrival in a refugee camp in West Germany was anything but pleasant. With the influx of thousands of refugees from communist East Germany and Hungary in the mid-1950s, living space was at a premium and forced everyone to share the little available space. Besides, with the prevailing “stigma” of being “refugee-people”, and being ‘profiled’ as such by the local people, created additional burdens.

Hubert’s parents who lost everything, including their business in East Germany to the communist government, saw themselves at “ground zero” in West Germany, to start again with nothing!

“Never give up – find a way and start again”!

The prevailing “refugee stigma” followed Hubert’s West German education and college time, where individual educational staff members subscribed to and were inciting “regular local students” to “profiling,” by condoning injustice towards refugee students like Hubert and others!

With a quickly developing unacceptable situation in West Germany, Hubert had made up his mind to start a new life outside Germany, as soon as possible. After Hubert’s education, he joined BEA (British European Airways) in Dusseldorf, which gave him the chance to travel. He began exploring the world. His dream was to emigrate to the United States of America.

However, it became impossible, as Hubert needed a sponsor in the USA, which he could not find. With his airline contacts, Hubert finally emigrated to Canada where no sponsor was necessary.

He began exploring the world. His dream was to emigrate to the United States of America.

“The value of a sponsor”.

With a new life in Canada, far away from old “stigmas” and limitations, Hubert found fair treatment and opportunity! Yes, one has to work harder to prove once worth as an immigrant! Hubert welcomed this challenge!

From 1963 to 1987, Hubert’s implication in the airline business, and later on in residential, commercial and investment Real Estate, set him up for his final success!

The five lessons Hubert learned early in his life as described above, are critical elements in developing a successful Network Marketing Organization. They formed the basis of Hubert’s success, among many other success factors.

Developed successfully a Network of Distribution throughout North America (Canada and the U.S.), and six European countries (Germany, Switzerland, France, Belgium, Holland and the United Kingdom) from 1988 to 1995.

Sold his Network Marketing Business in 1992, and became Corporate Consultant in Europe, at the invitation of the company.

Successfully reorganized the German operation in 1992 and 1993.

Successfully opened Switzerland and France in 1993 and 1994.

Training and developing the European Distributor Leadership from 1992 to 1994.

Created and authored the training manual “GETTING STARTED RIGHT – YOUR 90-DAY ACTION PLAN” – in English, French and German.

Retired in 1994 due to health reasons.

After regaining Hubert’s health in 1995, Hubert and Seta started a new Network Marketing Organization in Canada with one of the leading, global Nutritional Companies.

Pioneered the French-Quebec market for that company.

Created and authored the book “YOU CAN DO IT” – START SMALL – THINK BIG”!

Hubert’s success in the capacity as a Distributor, having built two successful Network Marketing organizations, and his position as a corporate consultant, give him a unique perspective of the Network Marketing Industry!

“Looking back at an incredible journey, my wife Seta and I realized it was not the destination, like “success” and “money” that mattered!

It was the journey we had embarked on at the time, touching thousands of lives, directly and indirectly, all over the world!

As our success snowballed, we took along more and more like-minded people, helping them break out of mediocrity, and realize their dreams.

Our journey has become a way of life for us. Make your Networking Business “your journey,” and share the wealth with others!”

Discover the hands-on Success Formula
Of Network Marketing, in simple, duplicable Steps, empowering people to unlock your Potential and become part of the 1% of Super successful people!

A STEP TO
SUCCESS!